Pooncarie, which today is a tiny town on the Darling River, was known in the late 19th century as ‘The Port’. At the time it was a vital staging place for the river steamers which began plying the Darling River in 1858 en route for Menindee and Wilcannia. Today there is little more than a hotel, a store, a post office and several dozen people. However, it still hosts the Pooncarie Cup, a popular race carnival, every October.

Our original intention was to only spend 3 days here but when our departure happened to fall on ANZAC day, I thought it would be disrespectful to not attend the local events on that day by travelling so we stayed an extra two days. Approximately 60 people turned up for the day to pay our respects to our returned servicemen and the loss of so many others in foreign wars.

This town has a close association to the wool industry during the boom years 1840 to 1890s.  It was originally gazetted as Pooncaira in 1863 and the area was first ‘established’ by Europeans in the 1840’s as the settlers took up illegal livestock runs on crown land.  By the 1860’s the government in an effort to gain control, formalised these illegal, and unfenced, claims.  These lands had been home to the Barkindji people for 40,000 years and it is believed the original town name of Pooncaira meaning is “large sandhill” in their language.

It was odd that the claim to fame for the town is called the ‘Old Wharf’ when not a stick nor remnant post exists today.  The Darling River which runs through the town today is a sad reminder of the criminal theft of inland waters by large agricultural businesses to the north aided and abetted by NSW politicians.  The Darling River doesn’t really flow here now with water restricted to 6klm North of the town and 8klm South between two weirs.  It is also very shallow with a few deep holes but mainly around 1.8 meters.

Burke & Wills came through this area on the ill-fated expedition in 1860.  More settlers followed and the town established itself as a service hub for outlying stations and more importantly, at the time, as a port for the paddle steamers that traded further up the river.  The other claim to fame for this small town is the hosting of the Pooncarie Cup on the NSW Labour Day weekend when the town population swells from 84 to over 1500 for that event!

The campgrounds here are quite barren but very reasonably priced at $10 a day each.  We have access to unlimited hot showers as the coin machine to control the shower length has been broken for the past two months (bonus for us!!!!) plus flushing loos.

Like all travel in the outback of Australia you do run into some unusual characters and we ran into two such characters. John Arthur Elliot the modern-day Camel Man (John Arthur Elliott – Adventurer, Entrepreneur & Motivational Speaker (johnelliott.com.au)).

He was wandering the outback with a very charming companion who I did not get a chance to talk too and his (now) five camels.  I enjoyed the music from the 60s, 70s and 80s that were belting out around a campfire although the singalong voices could have done with some improvement.

Other interesting history from this region is about the cattle & sheep barons around this era around which legendary myths were created by men such Henry Lawson, Will Ogilvie & Breaker Morant.  Kidman, Tyson & McCaughey created pastoral kingdoms of unparalleled proportions out here.  The light horsemen of World War 1 fame were bred on these vast plains.

The other claim to fame for Pooncarie is famous for is the town’s involvement in the shearers strikes of the 1890s when scabs were bought in to undermine the local shearers.  This was a time of high unemployment so recruits were easy to find.  Just to the north of the town a group of local shearers boarded the PS Rodney and evicted/evacuated the scabs, crew & passengers onto a nearby island and then decided to burn the vessel as a lesson to others.  The wreckage lies on the bottom of the Darling River 8klm downstream from Polia Homestead.  No one was ever convicted for the arson.  It was a hectic time in Australia and was the time when the Labor movement and unionism grew.  I am a great believer in getting a fair go and have never liked one sided workers agreements that favoured the wealthy so have no sympathy for the boat owners of that era who lost out when the insurers refused to pay for the loss of the vessel.

I am now starting to see what bird photographers call “lifers” – never seen before by that photographer. Around our campsite I have now photographed a Jacky Winter, Spiny-cheeked Honeyeater, Striped Honeyeater, Little Friarbird (lifer) & a Restless Flycatcher. Also spotted White-plumed Honeyeaters, Mallee Ringnecked Parrots and Galahs but no good photos.

Last night at this camp we lit the fire and had toasted marshmallows as a treat. 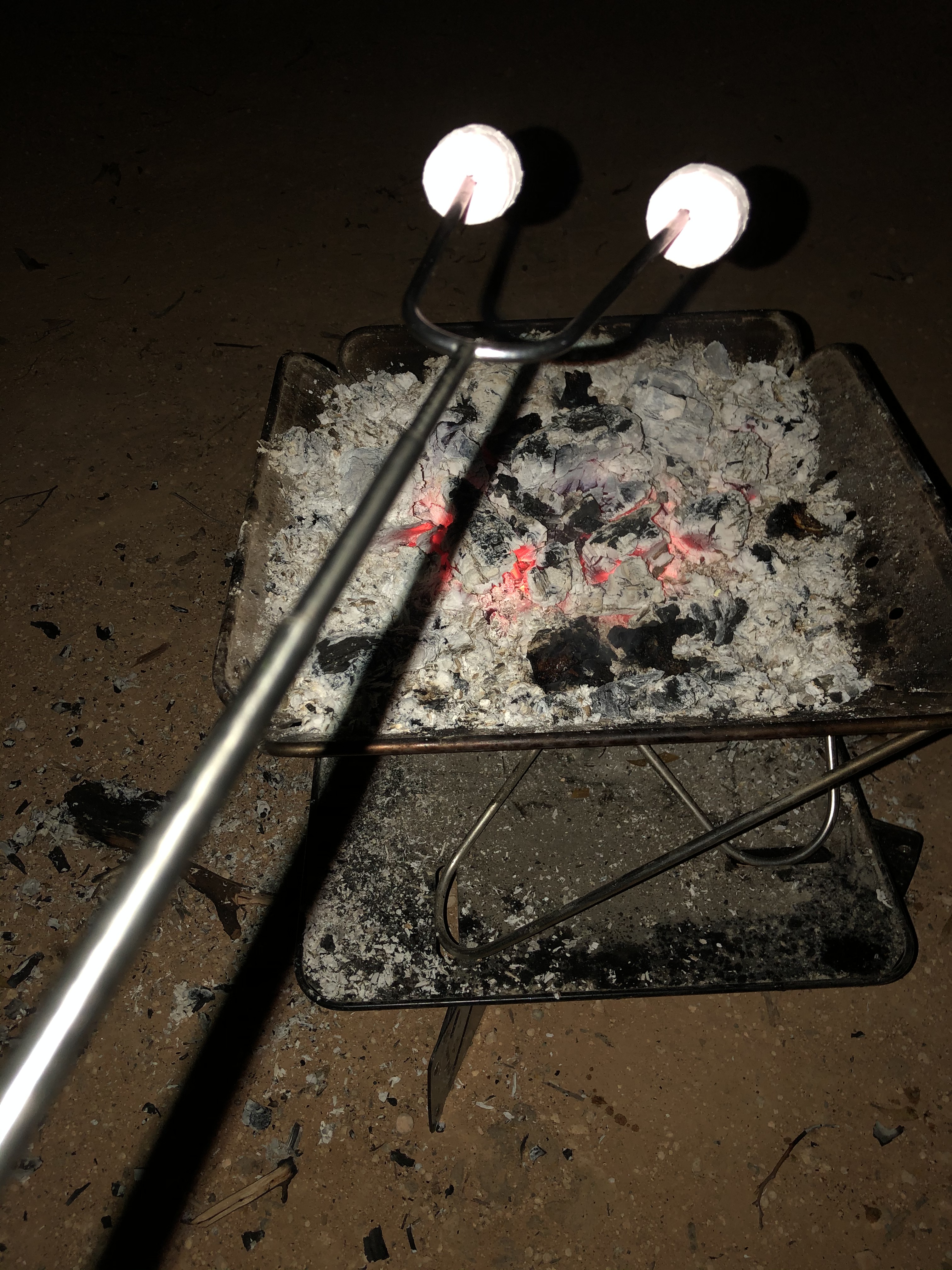 It was time to move on to the next part of the adventure at the Menindee Lakes.  Our new home for five days would be on the Darling River campground in Kinchega NP.